Updated Feb 3, 2010
A special FUNd run (JAN 30), organized by local Port Perry, ON residents has helped raise $7,500 for relief efforts in Haiti.  The funds will be directed to earthquake relief projects by FTC Canada through its partner agencies near Port-au-Prince.

Race organizer, Angela Connolly has long been following the efforts of local “port” doctors in Haiti and the medical-dental teams to Central America organized by FTC Canada.  This local connection runs deep as the FTC Canada Medical Advisor is Dr. Anthony Brown, a resident of Port Perry.

In fact, FTC Canada Medical Teams to Central America, since 2007,  have been largely composed of medical professionals from the Port Perry and Oshawa area.  This includes doctors, nurses and a pharmacist.

Dr. Brown, an avid marathoner, was driving to the FTC Canada Head Office on Saturday preparing a medical team for El Salvador but dropped in for the start of the event. 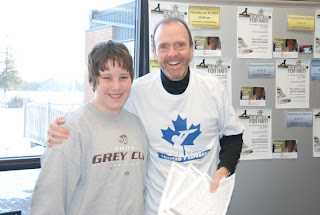 “We showed up at the start of the race,” says Brown, “and learned that 11 year old, William Leeder (shown in photo with Dr. Brown) had raised $1000 all on his own!”

“It was a great success.” adds Brown.

CLICK HERE to read about the event in durhamregion.com